Here we are in beautiful Chacala, Mexico, 40 miles north of La Cruz, having just spent two weeks in Banderas Bay for the regatta, now moseying up the west coast of mainland Mexico with Marielle, my crew since I left La Paz in February. 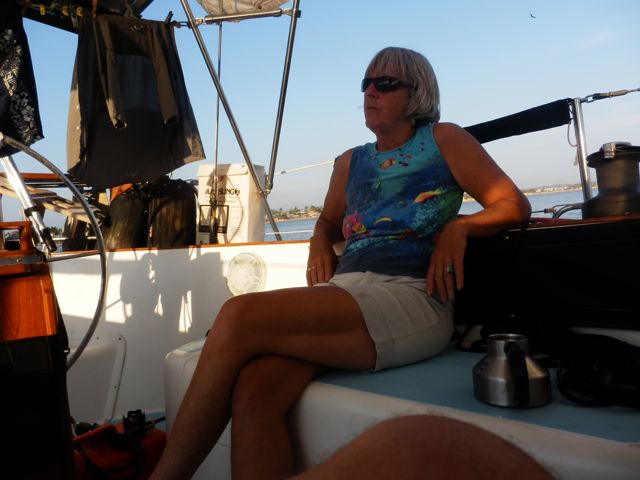 Marielle's last skipper described her as "fun and good help." She has proven to be far more than that. While I would certainly say that she is indeed "good help," she is also a hell of a sailor, understanding sail trim to a "T." Due to her general mechanical and electrical skills, etc., I have dubbed her "Chief." Best of all, she doesn't use too much water, a quality only a boater would appreciate. No need for a water maker with this gal. She stands a good night watch and is dependable as ever she could be.


The boat's doing fine, in tiptop shape. We've been able to smooth out the operation of many systems on the boat, including the wind vane, autopilot, spinnaker, reaching pole, weatherfax and a starting relay for the Yanmar.

We are in Chacala now. We started in La Paz in February, came down the east coast of Baja and spent three days in Los Frailes, waiting for a weather window. We crossed over to Cabo Corrientes and worked our way south with stops in Chemala, Tenacatita and La Manzanilla. We decided to stay a few days in Barra de Navidad, where we fueled the boat and spent a couple of nights in the marina. Since it's late in the season, with northers on the way, we chose to make Barra our turn-around spot and began working our way north. And here we are in Chacala. Next destination is Isla Isabel, a rookery for blue-footed boobies and frigate birds. ETD mañana.
Posted by Kim Philley at 1:24 PM